Despite the high risks of the Corona pandemic in Iran, the Iranian regime continues, in contradictory manifestations to this case, among which it has noticeably sought to claim that it deserves to reduce US sanctions against it immediately so that it can fight the Corona virus more effectively.

The Persian-language Radio Farda has published a report on the amount of Iranian official spending on media institutions that are used to mislead the media, and shows that the budgets allocated to Iranian propaganda abroad have begun to increase even in light of the outbreak of the epidemic.

US Secretary of State Mike Pompeo alerted this contradiction in late March by publishing footage of President Hassan Rouhani, telling senior health officials that the Ministry of Foreign Affairs in Tehran had launched “a concerted effort to influence public opinion to say no to sanctions” with the aim “Return our confiscated money in other countries.”

The US State Department noted that all that the Iranian regime wants is money only. It has rejected offers of medical assistance not only from the United States, but from charities such as “Doctors Without Borders”.

These facts point to the indispensable role that propaganda plays in the Iranian regime’s strategy to thwart the extreme pressure campaign of the Trump administration.

In the four decades and since its inception, the system has invested heavily in building a propaganda media machine at home and abroad, and in Western countries, particularly the United States, which is the target of messages broadcast by multiple government media outlets and “nongovernmental” organizations controlled by the system.

Observers believe that policy makers and analysts in the United States should pay close attention to the attempts of the system to form European and American public opinion, under the guise of benefiting from the crises.

The institutions that manage Tehran’s influence operations each focus on a specific mission, and there is an overlap between what they do, according to specialized reports, which confirmed that the most important of these organizations are the Ministry of Foreign Affairs, Iran’s IRIB channels and broadcasts, the IRGC’s information arms, and a group of religious organizations. Affiliated with it including the Islamic Development Organization, Mustafa International University and the Islamic Propaganda Office at Qom College.

The State Department, specifically the “public diplomacy” section, is one of the pillars of Tehran’s efforts to influence American public opinion, and these mechanisms may work to build a misleading picture of Foreign Minister Muhammad Javad Zarif, as a sane diplomat by pretending to be a different official from the ideology of religious extremists who are the pillars The Iranian regime. 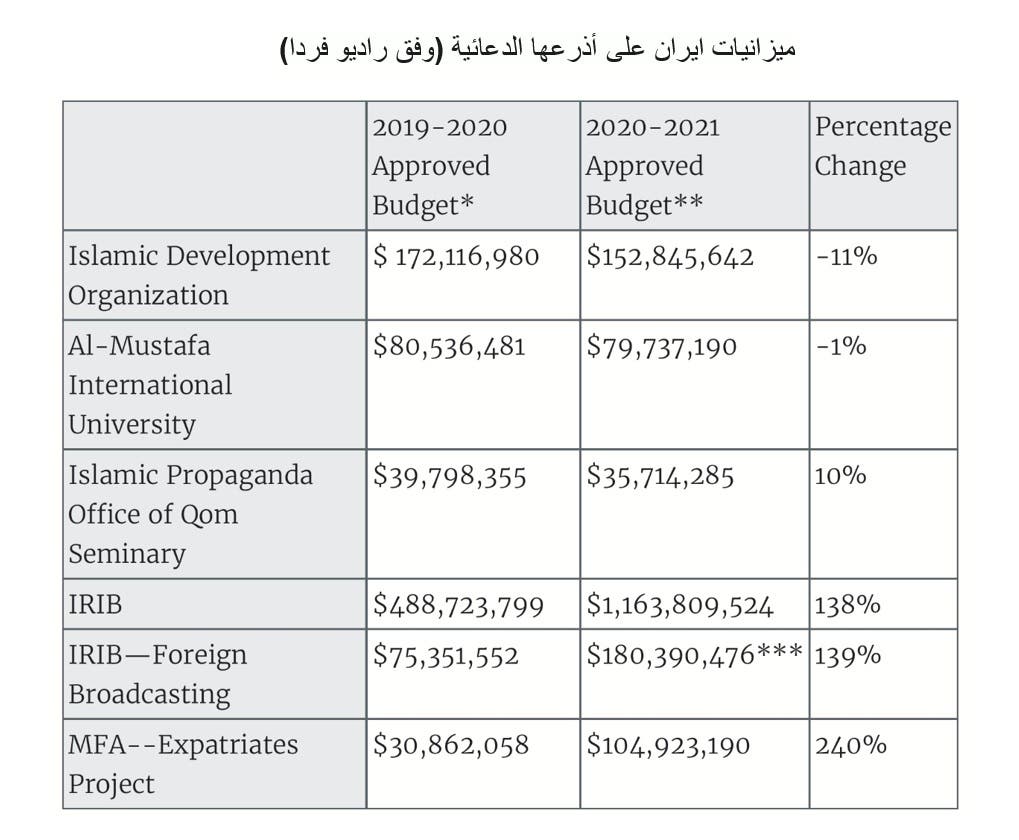 Iran’s budgets on its propaganda arms (according to Radio Verda)

Zarif, who was educated in the United States, has spent decades building personal relationships with American journalists, policy makers, and business executives in order to influence American public opinion and Washington policies, and plays the Department of Public Diplomacy, headed by ministry spokesman Syed Abbas Mousavi, playing an important role in disinformation campaigns. With the Iranian expatriate division led by Hussain Jabri Ansari, he sought to influence the millions of Iranian expatriates, most of whom resided in Europe and America.

System officials regularly meet with Iranian expatriates around the world, in brief and expanded meetings, while some have established organizations to promote sanctions relief and a more conciliatory approach toward Iran.

These shared goals are not reasons to conclude that these organizations coordinate their actions with Tehran, but it is clear that the regime attaches great value to their efforts.

The 2020-2021 budget allocates $ 105 million to influence operations targeting the Iranian diaspora, which is three times the amount of the previous year’s funding. This remarkable increase, amidst severe financial pressure on the system, indicates the value and expansion of these efforts.

With its monopoly on radio and television broadcasting, IRIB plays a decisive role at home and abroad, and for the formation of political discourse abroad, IRIB operates TV channels in English, most notably “Press TV” and “Hispanic TV” and in other major languages.

Political leaders such as Jeremy Corbyn of the British Labor Party and Pablo Iglesias of the Spanish Podemos appeared and were advisers to Iranian stations abroad, and the importance of the IRIB channels of the system appears to be evident from the magnitude of its budget. Despite the difficult economic conditions, the network will receive approximately one billion dollars this year, a significant increase from 488 million dollars a year ago.

The budget also allows the transfer of an additional 150 million euros available, approximately $ 165 million, from the Iranian National Development Fund to the channels of the official stations. It also appears that this money does not include the large advertising revenue achieved by the IRIB thanks to its monopoly on broadcasting, an amount that may be in the hundreds of millions, It pours into its official budget and allocates about 16% to foreign broadcasts.

The three religious organizations that have a central role in showing Iranian influence abroad, the Islamic Development Organization, the Mustafa International University, and the Office of Islamic Propaganda at the Qom Institute, are all entities that are mainly trained to train extremist clerics around the world, and spread sectarian propaganda, It is a continuous and focused effort in Latin America, even in the United States itself. There are clerics sympathetic to Iran as is the case with expatriate organizations, but there is insufficient evidence to conclude that these are coordinating with Tehran.

Al-Mustafa University has trained 50,000 students from 122 countries so far, and one of the teachers and consultants at Al-Mustafa University is Mohsen Rabbani, who worked for decades as a senior Iranian intelligence officer in Latin America and is wanted for his role in the 1994 terrorist attack in Buenos Aires, which killed 85 people.

A student of Rabbani and al-Mustafa’s graduate, Edgardo Rubin Suhail al-Assad, has established more than 20 sectarian religious centers in Latin America. The university and the Iranian Development Organization are closely coordinating their efforts to send preachers abroad. 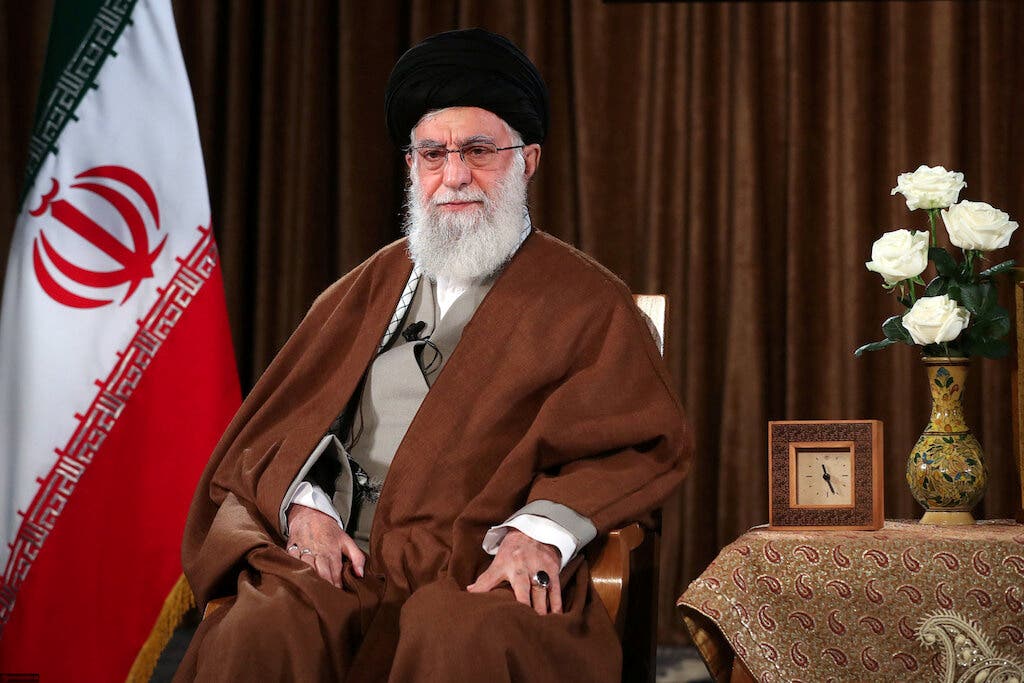 The U.S. Treasury can impose sanctions on these three under the terms of the June 2019 executive order that targets all individuals directly appointed by the Supreme Leader.

Two other organizations that play a role in exerting influence abroad are the Iranian Revolutionary Guards’ Fars News Agency and Tasnim News, both of which feature Western anti-American figures in the English language. 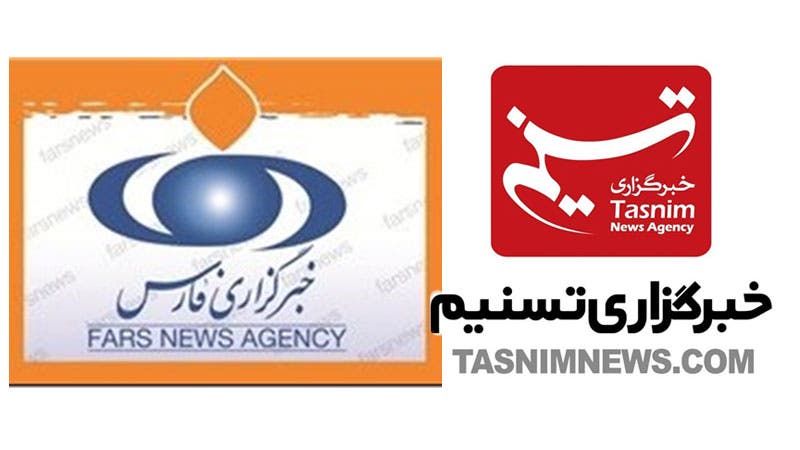 Fares and Tasnim regularly publish interviews with Western experts and analysts who repeat the propaganda of Tehran, and media figures associated with the Iranian Revolutionary Guards, such as Nader Talib Zadeh, travel around the world and invite guests to conferences in Iran to expand the network of influence of Tehran and its traveling colleagues.

Tehran has appointed Talib Zadeh to facilitate the recruitment assets of the Iranian Revolutionary Guards Corps, in reference to the degree to which the Iranian media are part of the security establishment.

Observers believe that the Iranian regime’s readiness to spend with this ramified amount on external and internal propaganda contradicts the pleas to lift the sanctions imposed mainly to reduce the Iranian regime’s crime through regional interventions and support terrorism.

Calls to unveil the activity of misleading campaigns and for the US administration to use relevant presidential and executive orders to impose sanctions on entities and individuals carrying out such an action will emerge, while targeting the heads of organizations affiliated with the Iranian regime will be a first step and welcome tens of millions of Iranians to expose and hold accountable propaganda outlets in their crackdown .